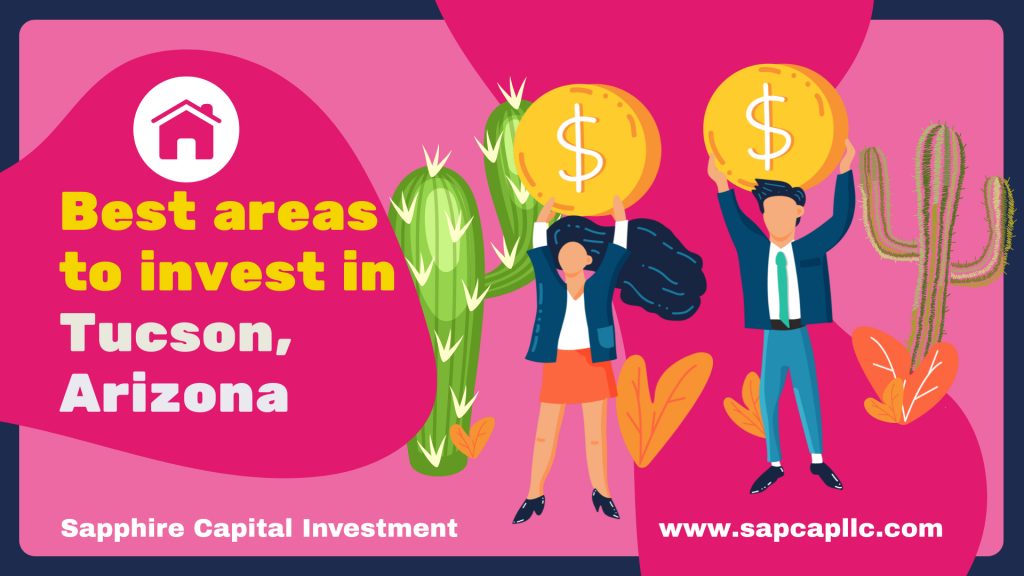 Have you finally seen the beauty and allure of Tucson? You are not too late to enter the fray. We can confirm that the Arizona housing market has been doing well over the years. And while investors and homebuyers have been concentrating on Scottsdale, Tempe and Phoenix, they are not the only options.

Tucson’s population has been on the rise with the numbers hitting the one million mark in 2018. New-comers are being attracted by the city’s strong economy, low-cost of living and its growth in the job market.

As a result, the housing market has been on its toes, trying to keep up with the increased demand for space by both individuals, professionals, students and young families.

For investors looking to build their investment portfolio or realize a steady cashflow, Tucson real estate is the right choice for you. To help you on your journey, the team at Saphire Capital Investment has narrowed down on certain areas/ neighborhoods that you should be interested in.

Best Tucson areas to invest in

We have established several areas and neighborhoods for the prospective Tucson investor. What informed our selection are areas that are in high demand, room for rental/ capital growth and have stable housing markets.

This Central Tucson neighborhood is a mix of university professors, young professionals, young families and students. The neighborhood offers a wide range of housing options from turn of the century double storey homes to delightful bungalows. Its streets are lined with charming and chic cafes, shops and restaurants that come alive when the sun goes down.

One of the biggest attractions in Central Tucson is the University of Arizona. It is one of the largest private employers in the cities and contributes significantly to the economy of Tucson. Boasting a student population of about 45,000 students, prospective investors can choose to take advantage of the steady stream of investors.

Located in downtown Tucson, this is one of the most affluent neighborhoods in Tucson. The property options in this area pay tribute to Tucson’s Spanish roots. In the 18th century, the area was taken over by Spanish soldiers who later on set up a colonial outpost. Investors in the area should expect to find historic homes here.

El Presidio offers a mix of the modern and the past. Though the neighborhood has modern amenities, the city has gone to great lengths to preserve and offer a rich cultural experience. Even establishments in the area adhere to this rule.

This neighborhood is making a case for itself. Dunbar Spring is situated to the north of downtown Tucson and has established itself as a vibrant community thanks to revitalization of the area.

After the turn of the century, much of the downtown area declined. The area became synonymous with crime, vice and neglected properties. However, things are looking up. Homes are being renovated, new developments are being erected and establishments are opening up. A sign of better things to come is the movement of new homeowners into the neighborhood.

A characteristic that defines Armory Park is its commitment to the arts. It is one of the city’s most sought after neighborhoods due to its architectural and cultural style. As a result, the neighborhood is on the National Register of Historic Places.

In the early 20th Century, Amory Park had developed into an affluent neighborhood for the ‘who is who’ in Tucson. The area fell into a decline in the 50s and 60s before it was added onto the National Register of Historic Sites. Followed by both public and private investments, the neighborhood has grown again to its former glory. Housing options in Armory Park include Queen Anne, Greek Revival, Victorian and Anglo-Territorial style houses.

Ready to be the youngest property owner in Tucson? You should consider purchasing property in El Presidio, Dunbar Springs, Armory Park and Sam Hughes.

Sapphire Capital Investment is the premier real estate investment company operating in, out and around Tucson. Using our experience and industry knowledge, we will help you select property in a neighborhood that matches your unique preferences and financial goals. By partnering with us, you are securing your future in Tucson.